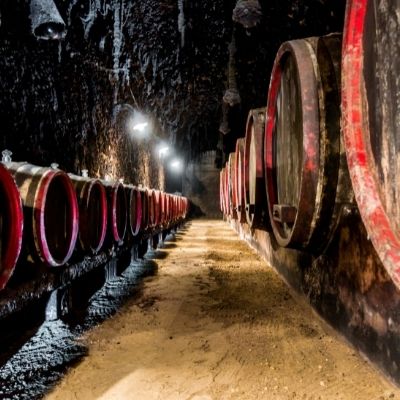 Tokaji Wine Region
The Tokaji wine region lies 220 km north-east of Budapest at the confluence of the Tisza and Bodrog rivers. The Zemplén Mountains are volcanic, rising in typically sudden cones from the north edge of the Great Plain. Two rivers, the Bodrog and the Tisza converge at the southern tip of the range where Tokaj Hill rises above the villages of Tokaj and Tarcal. From the Plain come warm summer winds, from the mountains shelter, and from the rivers the rising autumn mists that promote botrytis. Tokaji was the first wine knowingly to be made from botrytized or, noble rotten grapes. The conditions that cause the rot, the shriveling of the grapes, and the intense concentration of their sugar, acidity and flavor are unique to the Tokaj region.

The Terroir
It is a clay and volcanic land with an ideal microclimate to bring the legendary noble rot to its indigenous grape varieties. Ten million years ago, the area was full of volcanoes. Wines from each one of these vineyards can have very different characteristics so winegrowers love to produce wines from a single vineyard.

This unique terroir with its mouldy, labyrinthine underground cellars contributes to the distinct personality of its noble wines.

The Tokaji grape varieties
Six varieties of grapes are allowed to be grown in Tokaji. The most highly regarded indigenous varieties are Furmint and Hárslevelű. Other varieties grown to a lesser extent are Sárga Muskotály, Kövérszölö, Zéta and Kabar. Only these varieties can be used for a Tokaji.

Eternal Wines
The high levels of sugar and acidity also make for wines capable of long-term ageing. In the correct conditions bottles can continue to evolve and develop for decades and there are many accounts of exceptionally old bottles being opened and enjoyed.

The Harvests
Harvesting in Tokaji is a long process. It is usually carried out between the months of August and November. There are three types of harvest: dry wine harvests, aszú harvests and szamorodni harvests.  Although Tokaj is famous for its sweet wines, about 40 to 60 per cent of the wines produced here are dry. If the weather conditions are not good enough to produce the "noble rot" that turns the grapes into so-called "Aszú berries" the amount of dry wines increases. Aszú grapes are hand-picked one by one by very experienced people. On average, an experienced person can pick only six to eight kilos of Aszú grapes per day.

The third harvest or szamorodni, literally means "the one that comes". In this harvest, grapes are picked with or without "noble rot", i.e. there is no manual selection as in the Aszú harvest.  These grapes are then fermented together and the wine can be dry or sweet.

How the Tokaji is made
After harvesting, Aszú grapes are macerated in fermenting must, made from the first harvest, for 12 and 60 hours. Then, this mixture, called Aszú mass, is pressed and the resulting juice is fermented. Finally, the wine is stored in the mouldy, labyrinthine underground stone cellars that are unique in the world.

The degree of sweetness of the Tokaji
The sweeter the Tokaji, the more golden and more expensive the wine.
Traditionally the degree of sweetness is measured in puttonys. A puttony is a 25-litre wooden basket, which was used for picking Aszú grapes. The most appreciated wines have five or six puttonyos. This means that 5 or 6 25-litre baskets of botrytised grapes (with noble rot) are added to the fermentation must of each barrel. The higher the number of puttonys, the sweeter and more expensive the wine will be. Aszú wines with three puttonyos had 60 to 90 grams of residual sugar per litre, with four puttonyos had 90 to 120, five puttonyos from 120 to 150, and six puttonyos from 150 to 180.

Due to the numerous types of Tokaji wine and some confusion in the market, the new wine laws set the minimum residual sugar at 120 grams per litre. This means that the 3 to 4 puttonyos production has been phased out and now the 5 and 6 classifications will also disappear from labels. For the wine to be considered Aszú the barrel ageing must also be a minimum of 18 months.

Aszú
Wines produced from a blend of Aszú (noble rot) grapes and grape must. It has a minimum residual sugar content of 120 grams per litre and is aged for a minimum of 18 months in oak.

Eszencia
The most intense, rare, and most expensive Hungarian Tokaji wine. Aszú grapes are left to crush under their own weight and no direct pressing is allowed. The sugar content is so high (500 to 700 grams per litre) that it can take years to complete its fermentation (usually 4 to 5 years) which is carried out in glass (usually in demijohns). Even after a long fermentation the alcohol content rarely exceeds 5%. It is more syrup than wine so it is traditionally served on a spoon.

Szamorodni
Made from a mixture of "normal" and botrytized grapes. Depending on the sugar content of the grapes it can be a dry or sweet wine. If the style is sweet it has a minimum sugar level of 45 grams per litre. The dry style is very rare and unfortunately, there are few producers making this style. A dry Szamorodni cannot have a sugar content higher than 9 grams per litre.

Late Harvest
This style started to appear in the 90s. They are produced from overripe grapes but not necessarily botrytized. They are lively and fresh and less complex than the Szamorodni. They are usually aged for only a few months but this style has no ageing requirements. The sugar content per litre is between 50 and 180 grams.

Fordítás
Only produced when the harvests are excellent. Aszú berries are macerated in a must and pressed to create Tokaji Aszú. If the grapes are macerated a second time and then pressed again the resulting wine is Forbitás. The profile is close to Szamorodoni.

Máslás
The word Máslás means "copy". It is produced by pouring must over the Aszú lees (the sediments that have accumulated during fermentation and ageing) and fermenting it again. This category was abolished in 2013.

A wine of Kings and Popes
The most glorious period of Tokaji Aszú wines was between the 17th and 19th centuries when they were drunk in the European Great Houses. Louis XIV called it "wine of kings, the king of wine". The Russian Czars consumed large quantities of Tokaji.  When Empress Maria Theresa sent Pope Benedict XIV a gift of Tokaj wine, he exclaimed: “Blessed be the soil that hath grown thee, blessed be the woman who sent thee, and blessed am I who drink thee.” Catherine the Great, Frederick II of Prussia, Napoleon III, Goethe, Schubert, Beethoven and Liszt are some of the great names who have celebrated this wine.

Fortunately, all of us can enjoy this golden and sweet nectar and be living witnesses of a secular wine heritage.

At the end of the 17th century, Tokaji Aszú wines were so well regarded throughout the Courts of Europe that Prince Rakoczi insisted on a classification of the finest vineyards around the 28 villages in the region into:  Great First Growths, First Growths, Second Growths and Third Growths.

It was in the last third of the 18th century that Jews settled in large numbers in Hungary's Tokaj-Hegyalja wine region from Galica (present day Ukraine/Poland), an event that also influenced the development of the village of Mád which today has some of the most famous first-class vineyards. At that time, the Landlords of Mád called upon Jewish merchants recognized for their aptitude and knowledge, to sell their wines.

In the beginning Jewish merchants traded the wine of the nobility to Poland and to Russia at a better price, a fact that only improved their reputation as good merchants. The number of Jewish families increased to such an extend that by the end of the 18th century they founded a separate congregation and a synagogue was built.

Jews engaged in the trade of wines produced by the vineyards of noblemen and became later a driving force of development in the Hegyalja region. They also gave birth to a particular, local culture of mixed Hungarian-Jewish origins, that survived until the Holocaust.

There were two Jewish families in Mád - Deutsch and Zimmermann - that acquired significant vineyards and managed to keep them from the end of the 18th century until the years of World War II. The latter family, the Zimmermanns, also owned some of the buildings where Royal Tokaji is now based. The unforgettable events of World War II put an end to Jewish community life in Mád. Most of them were exterminated in concentration camps and the few survivors have predominantly emigrated with only a handful of them ever returning here.

The two world wars and the Great Depression in 1929 shook the entire settlement with the World War II, as shown above, resulted in the destruction of the famous Jewish community. Soviet occupation of 1944-1945 also caused significant damages to wine and vineyards of Mád.

Nationalization carried out in the years following 1945 made the large estates disappear, and the forcible creation of communist co-operatives was to follow. The vineyards of Mád were passed over to the Aggregated Wine Works located in Tokaj.

Winegrowing became focussed on the low-quality demand of the Soviet Union together with some other “friendly” socialist states. The quality of the local wine was severely affected as quantity overwrote quality. Political changes that began in 1989-1990 brought new opportunities to the inhabitants of Mád and led to the founding of Royal Tokaji.