Home / All posts/Wines from Colares 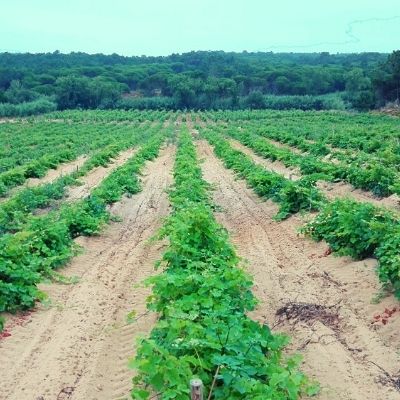 Colares is a charming village reclining on two hills of the Sintra Mountains and the Atlantic Ocean. The existing vines are increasingly reducing, and their productions are limited. It's a surviving wine region that could be in danger of extinction, which is why its wines are rare, appreciated and much sought after.

History
The incredible wine history of the town of Colares goes back to ancient times. A century before the Christian era, some records speak in Lusitânia Wines as one of the best in Europe. During the reign of King Afonso III (1245-1279), for vine growing to prosper, the land was donated to noble families with the condition that they would grow vines. The development of the vineyards continued, and King D. Fernando (1367-1383) paved the way to embark on the first wine-exporting venture. The wines from Colares gained fame and served on the royal tables.

In 1865 phylloxera devastated the vast majority of Portugal's and Europe's vineyards in the biggest plague that ever was and ever will be. However, the Colares vineyards remained unscathed. The sandy soils, where they planted, protected them in their entirety. This tiny insect, which comes from America, cannot penetrate to the depth of the roots of these vines, which are up to 8 metres deep. This depth also protects the vines from strong sea winds, salt breezes and humidity.

In 1908 it was recognised as a demarcated region with a unique and rare heritage in the world of wine.

The geographical area corresponding to the Designation of Origin "Colares" comprises the parishes of Colares, São Martinho and São João das Lampas.

The vines that grow on the sand
The unique characteristics of Colares wine are due to its grape varieties, soils, climate and ancient and unique method of planting the vines.

Climate
Located between Serra de Sintra and Cabo da Roca, the westernmost point of Portugal, it suffers a direct influence from the Atlantic Ocean and the mountains. The formed microclimate is humid, with frequent fogs and strong sea winds that have made the growing of vines, unlike anything we have ever seen. Here, the vines are low to the ground to shelter from the wind.

Soil and Vineyards
There are two sub-zones: one with "sandy soil" in the dunes and another with "hard soil", composed of clay-limestone soils.

DOC Colares wines come mainly from vines planted in "sandy soil". Sandy soils are poor and do not allow nutrients in but, underneath the loose sand from the Tertiary age, there is a clay sub-layer from the Cretaceous, which belonged to the sea, due to the vines planted using a unique method in the wine world. Trenches are dug in the sand to find a layer of clay. It is here that the vines are planted and take root. The sand is replaced, together with manure, for 3 or 4 years. The vineyard is ready for the first harvest after this process.

The vines grow horizontally close to the sand, with arms of old wood where the vines grow. The grapes develop close to the ground, and they have more exposure to the sun than traditional vineyards. Dry cane fences and loose stone walls are builds, which the viticulturists sometimes carry from their vineyards on "hard ground", creating a unique wine landscape and protecting the vines from sea winds and salinity. About six weeks before the harvest, the grape growers put up stakes to prevent the humidity from spoiling the grapes. Sometimes, to avoid scalding, the grapes are covered with dried herbs. It is artisanal viticulture that is part of Portugal's wine-growing heritage.

Although the minimum ageing period is 18 months for reds and 6 months for whites, followed by bottle ageing of 6 and 3 months, respectively, Colares wines only reach their maximum quality after several years.

DOC Colares wines stand out for their balance and a complex final taste in which there is the perfect fusion of tannins and acidity that characterises this region.

A red wine made from the Ramisco grape variety has a ruby-garnet colour and astringency softened with ageing, acquiring a beautiful brownish tone and developing an extraordinary aroma.

White wines from the Malvasia de Colares variety have a colour between citrine and golden straw, a very fruity aroma, with fruit flavours that make them extremely pleasant.