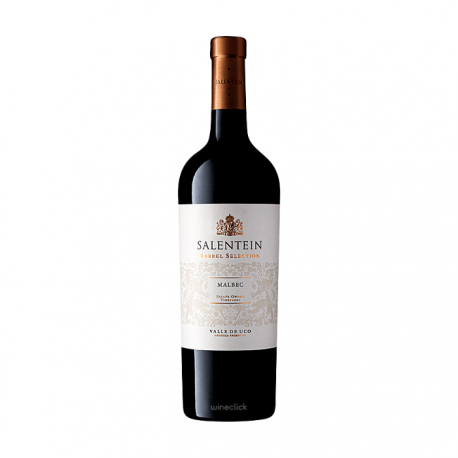 Bright ruby red color, display aromas of black cherries and blackberries complemented by delicate floral notes and a hint of tobacco. The palate is balanced, intense and complex with flavors of red currants, black cherry and cinnamon that lend a level of sophistication at the long, moderately dry finish.

Bodegas Salentein is located in Mendoza, an Argentinian province that is synonymous with wine. The soil in this region is sandy and loamy, and the weather, dry, with very hot days and very cool nights. The presence of over 900 bodegas and 145 thousand hectares (358 thousand acres), of vineyards explain why this region is the most important wine-making area of the country. However, this land has much more to say. This is Bodegas Salentein’s belief, and it acts in consequence, spreading at an international level the emergence of first-rate bodegas in Argentina.

A new vision of the quality –with classic varietal plantations, preservation of ancient vines, re-application of artisanal European techniques, and the use of advanced technology- gives as a result wines of international level.

Vineyards
Bodegas Salentein’s plantations rise in the elevated mountainsides at the base of the ancient and snowy Andes. The region is located in the Argentinian province of Mendoza, in an area known as Uco Valley (Valle de Uco). The characteristics of such location – its important elevation and alluvial soils, its sunny days and cool nights- offer an ideal microclimate for grape cultivation and the growth of the highest quality Malbec grapes.

The whole plantations’ area totals to 2.000 hectares (5.000 acres), with 800 (2.000 acres) planted with grapevines. The space includes numerous elevations and diverse soils, a variety that allows the maturation of different types of grape. The grapevines –with an age between 2 and 35 years old- are an 80% red and a 20% white.

About bodega
The bodega is located at an elevation of 1.200 meters (4.000 feet), right in the vineyard’s center. More than 49 hectares (121 acres), of native desert habitat were preserved and are a part of the bodega’s everyday landscape. The western horizon is dominated by the close snowy Andes, which have an elevation of over 6.100 meters (20.000 feet). The magnificent bodega was designed taking into account two aspects: the shape and the function.

The cross shape facilitates a careful management of the grape and the wine, while it allows a reduction of the path that both the fruits and their product traverse throughout the stages of the process. Each wing is itself a little bodega with two levels. In the first one, stainless steel tanks and French oak casks enable fermentation and storage. While, in the subterranean level, the wine is aged in oak barrels.

Both floors allow the circulation of the tanks’ liquid to the barrels through a traditional system of gravity transference. The four wings converge in a circular central chamber, similar to an amphitheater, built inspired in the classic temples of antiquity.

The Cellar
The subterranean bodegas are located nine meters (29 feet) underground and have a constant temperature of 12°C (54°F), with an 80% of humidity in the environment. The wine is aged in small French barrels made of oak, of 225 liters each. Altogether, these level houses 5.000 barrels. Another characteristic of the cellar is its stone floor. Seen from the superior level, the floor of the central chamber shows an important design, of strong symbolic content: it’s based on the wind rose, with each end oriented towards the cardinal points. In this way, it represents its relation with the rest of the world. For this floor’s construction, natural stones of the Cuyo region were used, the yellow quartzite sandstone, the green chlorite of schist variety, and the red limonite sandstone are among them.

José Galante is much more than a winemaker. He is, due to his knowledge and his career, one of the enologists with most expertise in Argentina, and one of the icons of the national modern wine making. His name is unavoidably bound to the change in Argentinian wine styles since the 1980s. For 34 years, Galante worked as the main enologist of the bodega Catena Zapata, and received many of the flying winemakers from all over the world which the bodega hired in order to strengthen its creations. There, he made memorable products that became milestones in the industry, until 2010, when he joined Bodegas Salentein as chief winemaker. One of the keys to his success is the style he brings to the wines. Far from following fleeting trends or making products without identity, he always produced great, modern varieties which preserved the identity of the Argentinian wine. As Bodegas Salentein’s enologist, his wine-making philosophy consists of “preserving entirely the spectrum of aromas and flavors of the fruit through a soft and gentle fermentation process, with excellent technology and a particular emphasis in achieving the best expressions of the Uco Valley”. The wines must incorporate the wooden contribution without affecting the varietal or the soil typicality; “aromatic wines of great concentration, good tannic texture, soft and silky, and long duration in the palate”, he emphasizes. Bodegas Salentein’s wines are authentic terroir wines, products which are ambassadors of Uco Valley’s elevations and carry in the bottle a piece of this land. With more than 34 harvests already done, and after producing in the most important regions of Mendoza, José Galante firmly believes that the Uco Valley is the best area in Argentina for producing first-rate wines.