Vinhos Verdes, the largest wine region in Portugal, and one of the largest in Europe, as many hydrographic resources. Some say the designation "Verde" (green) owes its origin to the wine's acidity and freshness, resembling unripe (green) fruit. Others affirm that "Verde" comes from the region's vegetation, which imparts a green tone to the soil, even in winter. However, the name Vinhos Verdes (direct translation: green wines) owes its origin not only to the surrounding environment, but also to the type of wine produced in this region, which is typically acidulous, light, fairly alcoholic and has good digestive properties.
The Denomination of Origin is divided into nine sub-regions: Monção e Melgaço, Lima, Basto, Cávado, Ave, Amarante, Baião, Sousa e Paiva. Monção e Melgaço is the most unique of the subregions, as it is protected from direct Atlantic influence, has a climate of maritime and continental influence, with more full-bodied wines and higher alcohol levels. The region also produces sparkling wines, announcing itself as one of the most promising places for quality sparkling wines.

Its vibrant freshness, elegance, lightness and aromatic and flavorful expressions, especially its fruity and floral notes, are the characteristics that define and differentiate Vinho Verde, however the differences between the wines from different parts of the region are notorious. For instance, Monção’s Alvarinho is a full bodied, dry white wine, while the Loureiro from Vale do Lima is softer and more perfumed.
The red wine produced in Vinhos Verdes, formerly the main wine in the region, is currently almost exclusively consumed by local populations. It is a very acid, red coloured wine produced from grape varieties such as Vinhão, Borraçal and Brancelho, among others. It is much appreciated to accompany the region’s gastronomy.

Climate: Influenced by sea breezes from the Atlantic Ocean, temperatures are mild throughout the year. Precipitation is high in this region.

First export
From the 17th Century onwards, exports of "Vinho Verde" to England have become regular. It is likely that the first wines to be exported were from the area of Monção and that the transaction was made through Viana do Castelo. 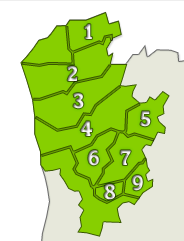