Lisboa wine region is made up of nine Denominations of Origin: Colares, Carcavelos and Bucelas (in the south, near Lisbon), Alenquer, Arruda, Torres Vedras, Lourinhã and Óbidos (in the centre of the region) and Encostas d'Aire (in the north, close to the Beiras region). Because of its diversity of soils, grape varieties, exposure of winds, and other aspects, it also produces a great diversity of wines.

South Area
Colares, is on of the most original sub-region, neighbouring the great surfing beach of Guincho, makes high-acid, tannic wines from red Ramisco grapes, planted in sand dunes, and gently aromatic whites based on Malvasia. Just south again, between Arruda and the city of Lisbon, is the small but high-quality white wine region of Bucelas, with sheltering hills to the west and the wide, nearly land-locked estuary of the Tagus to the east. DOC Bucelas is a fresh, crisp, dry, mineral white, made with a minimum of 75 per cent Arinto, sometimes with Rabo de Ovelha and Sercial. There is also sparkling Bucelas. Carcavelos, just west of the capital, makes tiny quantities of fortified wine that is nearly always sweet, from red or white local grapes.

Centre Area
Sub-regions of Alenquer, Arruda, Lourinhã, Óbidos e Torres Vedras.
In this mild climate the grapes ripen with tranquility and wines wines with good concentration and acidity. Red wines are elegant, aromatic, rich in tannins and capable of ageing for some years in bottle. White wines have a fresh and citric character.

North Area
Encostas d’Aire, the region's largest Denomination of Origin, was the last one to suffer the consequences of modernisation. New grape varieties were planted as well as some international grapes as, for instance, Chardonnay and Cabernet Sauvignon. The wines' profiles started to change: they gained more colour, body and intensity.

Climate: Is mild due to Atlantic influence. Summers are fresh and winters soft, though colder in areas farther from the sea.

Soil: Mediterranean brown, normal red soils or parabars of fine sandstones, clays and claystones. In Colares the soils are made of sand based on consolidated materials, usually called “sand floor”

Bucelas wine
This wine was very famous in the time of the French Invasions (1808-1810). Wellington was very fond of Bucelas wine and took it to England with the intention of offering it to King George III.

Lisbon Hock
In the second half of the 16th Century, Bucelas wine was already known in England. The English would call it Lisbon Hock, meaning dry white wine.

Carcavelos wine
Wellington's troops would frequently drink this wine and took this custom to England. Thus, for several years, Carcavelos wine was widely exported to that country. 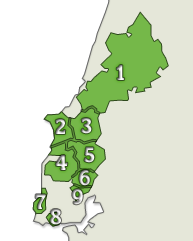