With an amazing landscape, it was declared a World Heritage Site by UNESCO. More than 250 years old, it is one of the oldest demarcated regions in the history of wine.
The Douro region is divided into three sub-regions: from west to east the Baixo Corgo, Cima Corgo and Douro Superior.
The fertile, cooler, rainier Baixo Corgo, closest to the Serra do Marão, is the sub region with the most vineyards.
The Cima Corgo, including the towns of Pinhão, São João da Pesqueira and Tua, is the heartland of fine port production, also the source of many of today’s fine unfortified wines. The Douro Superior, very cold in winter, infernally hot in summer, is the biggest of the sub-regions (by no means all planted but much planting is underway). The Douro has a huge selection of local grape varieties, and many vineyards of impressive, gnarled old vines that give small yields of rich, complex wine, whether for port or for unfortified wines. Dozens of different grape varieties may be mixed together in these old vineyards. In modern vineyards, vines are planted separately, and five grapes have been declared the top choice for port: Tinta Roriz, Touriga Franca, Touriga Nacional, Tinta Barroca and Tinto Cão.

Climate: In general it is quite dry. In Baixo Corgo it is more humid and drier, in Cima Corgo it is Mediterranean and in the Douro Superior gets be desert with temperatures that can reach 50 degree

Soil: The overwhelming majority derives from shale. This stone retains enough moisture to allow the vine to survive in arid conditions. It also has a high heat retention capacity during the day, which gradually releases during the night, reducing the daily thermal amplitudes and contributing to the advance of maturation.

Spirit
As Port wine exports increased, one started adding spirit to it. This way, the wine would remain unaltered during the journey. The addition of spirit would also stop the fermentation process, making the wine sweeter and bringing it closer to the taste of the English market.

Douro: Demarcated Region
In 1756, the Companhia Geral da Agricultura das Vinhas do Alto Douro was created, an organisation whose main competencies were: to limit the region and register the vines, classify the wines according to their quality and establish certain wine practices in the region. This was the birth of one of the first demarcated regions in the world.

The name Port
The denomination "Port" is explained by the fact that the wine is stored and commercialised from the port located between the cities of Porto and Vila Nova de Gaia. The wine would go down the river Douro in rabelo boats and age in cellars in Vila Nova de Gaia, since this city has little temperature changes throughout the year.

The rarest Port
The rarest and most expensive Port in the world is produced by Quinta do Noval. Its National Vintage Port is only produced from time to time and always in a limited number (from 200 to 250 boxes). One of its peculiarities is that the grapes come from grapevines planted without rootstocks, which are very old and rare. 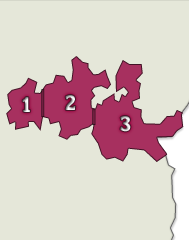