Located in the North Atlantic, the Azores Archipelago comprises nine volcanic Island and it has three specific wine regions: Graciosa (in Graciosa Island), Pico (in Pico Island), and  Biscoitos (in Terceira Island). Wine production in the Azores is a centuries-old tradition. The first vineyards date back to the settlement and, both in the past and in the present, these Atlantic Islands provided them with very favourable edaphoclimatic conditions for their development.

Most vines on the Azores are grown within “currais”, small dry stone wall enclosures made of black volcanic rock. Vines are planted in holes and cracks in the lava flows, and the walls protect the vines from Atlantic winds and salt spray. The vineyards of Pico are a particularly stunning example. So spectacular are, that a vineyard area on the island of Pico has been declared a UNESCO World Heritage Site.

Throughout history, vineyards have played an important role in the agricultural economy of the region, but in the second half of the 19th century, phylloxera and cryptogamic diseases ruined virtually all of the Old Verdelho” variety, which is the most famous and most grown grape variety. It is thought to be originally from Sicily or Cyprus and afterwards taken to the Azores by the Franciscan Friars, who cultivated it throughout the islands. However, the reconversion of the vineyards made it possible to recover the traditional Verdelho wine and led to the creation of the current Verdelho. A noble wine, it is a direct descendant of the “Old Verdelho” and it has preserved its character in the vineyards of the islands of Pico, Terceira and Graciosa. These vineyards keep a treasure trove of experiences whose legacy will be inherited by the next generations and wisely maintained.

The Azores are famous for producing fortified wine in Pico and Graciosa Islands, as well as for the production of a light, dry white wine in Terceira Island. Pico wines are very balanced with strong minerality. In Graciosa the wines are fresh and fruity.

Climate: Deeply maritime. Temperatures are mild throughout the year, despite the high level of precipitation and atmospheric humidity.

Pico Verdelho
In the 17th and 18th Centuries, the wines produced in the Azores, namely the ones produced in Pico, were exported to Russia and most northern European countries. After the Russian revolution in 1917, several bottles of Pico Verdelho were found kept in cellars belonging to ancient Russian czars.

Vinho de Cheiro
By far the majority of the vines grown on the islands are American species, planted after phylloxera. They make a curiously musky wine known as vinho de cheiro or ‘fragrant wine’ – loved by the islanders as well as island emigrés in Canada and the USA.

Source: Infovini, Wines of Portugal and Wine Comission of the Region 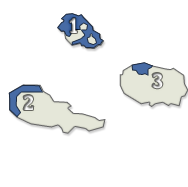